I want to make a special brass washer, flat on one side and conical on the other. The stock is 7/16 inch diameter brass, and the cone angle is 60 degrees from parallel to the stock rod axis.

It is easy to set up the Sherline lathe for the conical cut, just pull the alignment key from the bottom of the headstock and rotate the headstock CCW by 30 degrees. The cut can then be made by advancing the cross slide leadscrew. When tapers are less than 45 degrees, you advance the axial leadscrew.

I have seen headstock rotation only on small lathes like Sherline and Taig. The motor mounts to the headstock and rotates with it. Motors for larger lathes are generally too heavy for this, so tapers are made with a compound slide.

So let us see how hard it is to set up this cut with a compound slide. I bought a Chinese minilathe, and am trying to learn how to use it.

Just turning the compound 30 degrees CW from axial doesn’t work; advancing the compound would just charge the cutter straight into the material, 90 degrees from the desired travel direction.

So let’s rotate on around to 120 degrees CW from axial. 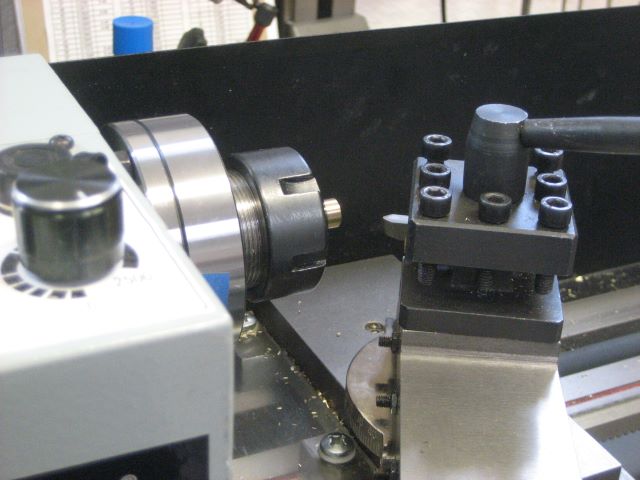 Direction is good, but I can’t push the apron assembly far enough toward the headstock to bring the cutter into position.

Instead, trying turning the compound 60 degrees CCW from axial.

Again, direction is good. But I have to run the compound far back to access the screws that lock angular motion, and then I can’t turn the compound crank because it is up against the chip shield.

Final answer: turn the compound 60 degrees CW from axial, and make the cut on the back edge of the part.

Of course, the bit has to be turned upside down, and stacked on top of another bit to put the cutting edge at correct height.

A conventional lathe with compound slide doesn’t have to be this clumsy. Some have compound angle locks that are more readily accessible, and few have chip shields that get in the way.

I am impressed with the simplicity and ease of use of Sherline’s configuration, and would like to see it available on a larger lathe. This might be possible if the headstock was a spindle motor with a suitably large spindle.

This entry was posted in Turning. Bookmark the permalink.

4 Responses to Cutting a Steep Taper