So far the tests have concentrated on plastic materials. My first group of reels used Delrin pawls running on bronze ratchets. When I would run a metal pawl on metal ratchet, there would always be excessive wear, but I was using soft and easily machined metals. Another problem with metal pawls was that they were too loud.

I initiated some discussion of materials on Rod and Reel Maker’s Forum. Success with tool steel was reported. However, several factors have kept me from any work with tool steel:
1. The machinability index is very low – important when working with Sherline mill.
2. It would still be too loud.
3. It would have little corrosion resistance.

Seeking a more suitable steel, I have settled on 416 stainless. This is a free machining grade that can be hardened, and has about 13% chromium for improved corrosion resistance. It does not solve the sound level problem. Impact resistance is slightly higher than for A2 tool steel. I have made two sets of ratchets and pawls from 416; the first set was tempered at 700F. Because this temper could lead to “blue brittleness”, I did a second set at 600F. Two recent posts ( 8 and 17 Aug 2011) cover heat treatment.

In this post I report on results obtained with the higher speed gearmotor (220 rpm). It emphasizes impact over friction. Unlike the low speed tester, wear cannnot be easily measured, so I can only make qualitative observations.

Here is the 220 rpm tester, along with some of the test items. My standard test is to run a ratchet-pawl set for 15 hours, resulting in about 6 million impacts on the pawl. When I ran a Delrin pawl on a bronze ratchet, there was no significant damage to either. The Delrin pawl was marked on the flank where ratchet teeth strike, but there was insignificant material loss.

When I ran the first 416 stainless pawl on a bronze ratchet, much bronze debris was created, but there was little damage to the pawl. 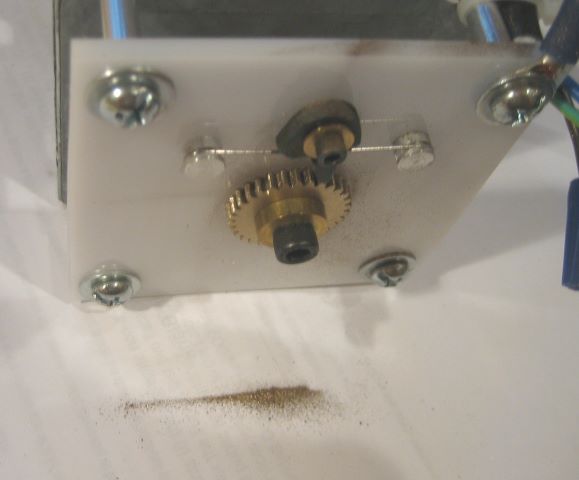 Here is the second stainless pawl (600F temper) before testing. The hardness of this part is Rockwell C 43.

And here it is after a 15 hour run on the second stainless ratchet. The tip has lost material, but not as much as for the first stainless pawl. This suggests that the lower temperature temper may have helped. 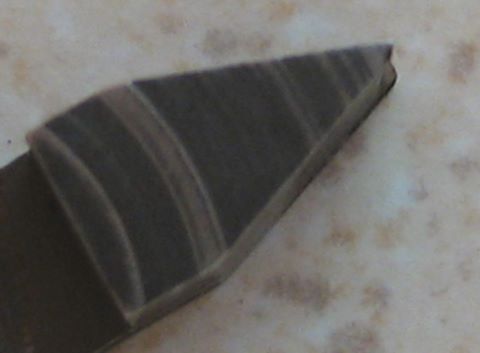 Is pawl wear a problem? Apparently it can be. Here is a photo of a well-used Hardy “Green Princess”. 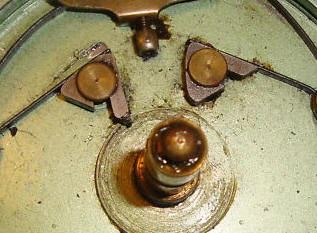 I have decided that Delrin is the best choice of the materials that I have evaluated:
1. Lighweight
2. Widely available
3. Corrosion resistant
4. Easily machined
5. Superior wear characteristics
6. Relatively quiet.

Update 13 Oct 2011: It has just come to my attention that the material that I have been calling “Delrin” is actually acetal copolymer. There is a minor difference, read here.

Update 3 Nov 2011: Swedish reel maker Anders has also been using acetal, for ratchet as well as pawl. He has now conducted a test to confirm the material choice. Here is his photo. 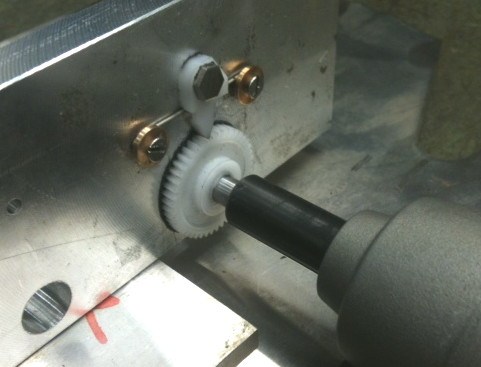 Addendum 6 Dec 2011: Why bother with testing ratchets and pawls? Here is a guy with a Hardy LRH for which the ratchet is “shot”. In my opinion, a Hardy reel should have the same warranty as a Craftsman tool: show that it is broken and you get a replacement. Regardless of who bought it and when.

This entry was posted in Click, Pawl, Testing. Bookmark the permalink.