After my first attempt at heat treating (see “Heat Treatment”, 8 Aug 2011) I sought and received advice. Thanks to Ron and Tom.

In this second attempt, I made a new ratchet and pawl, plus two ratchet blanks to use for hardness test. I also bought 309 stainless foil bags to hold the parts during austenitizing. These bags have welded seams. The sheared edges of the foil are sharp enough to cut fingers.

The parts, plus a piece of kraft paper, fit nicely in one layer in a single bag. I folded the bag opening twice, and that seemed secure. My plan was to quench the parts while they were still in the bag, which is the procedure recommended in the book by Bryson. I had read elsewhere of another procedure wherein you tear open the bag and extract the parts before quench, but I could not imagine how to do this when the bag and parts are at a temperature above 1500F. The parts were tightly held in the bag, and it looked as if there would be sufficient contact with the foil to ensure rapid cooling.

What I did not foresee was that the bag would become pressurized when the kraft paper burned. So I was surprised to see a bulging bag when I opened the kiln when it was time to quench. Here is the inflated bag, floating in quench oil. 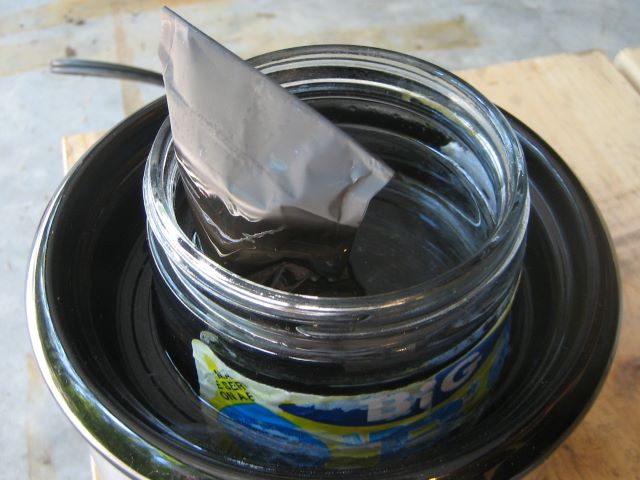 I believe that what happens is that during combustion of the kraft paper, oxygen molecules are replaced by combustion product gases (carbon dioxide, carbon monoxide, water vapor). The new gases occupy more volume than did the oxygen, and the internal pressure developed in the bag cannot be resisted by the thin foil walls. One of the two folds at the bag opening was completely undone, but the first fold appeared to be intact. Undoubtedly it had a small leakage path to allow the escape of combustion products.

Does this mean that new oxygen entered the bag after combustion? I think that this would be a minor effect. As long as temperature is rising in the bag, gases are escaping and new oxygen molecules would have to “swim upstream” to enter. Even after temperature is stable, there is only a very small opening for diffusion of oxygen back into the bag.

Having now used the bags, I think that there is reason to prefer the flat foil. If you tightly wrap with flat foil, you may be able to leave less internal air space than I had with the bag. That means a lesser volume of combustion product, and perhaps less expansion of the package. The are now 3 folded edges instead of just one, and only one of those edges has to deform enough to let the combustion product escape. In the end, the flat foil may more closely fit the parts when it is time to quench. A problem for those of us who are just experimenting is that a roll of foil costs much more than a few bags. Maybe a good solution is to buy some larger bags and cut them up into foil patches.

I did the subsequent temper at 600F, after extracting the parts from the bag (at 150F).

Here is the ratchet after temper, with a light oxide coating. This is much better than the “gunk” that I got when using anti-scale compound.

Here is the ratchet after a couple hours of tumbling in abrasive media. If I had sanded out the machining marks before heat treat, it would be bright (except for the flanks of the teeth).

I did a second similar process on a ratchet blank of 41L40 steel to see what hardness I might achieve, but I do not expect a good result. The austenitize temperature was 1575F and tempering was at 350F. I looked for a 4140 I-T diagram after I had done the procedure (found one in my college textbook of 40 years ago) and only then did I realize that quenching had to get the material below 800F in about 3 seconds. There cannot have been much martensite formation in this case, because there was not the direct contact with oil that would be needed to achieve such rapid cooling. I have little motivation for further work with 4140; the bar that I had stored in my garage for a few months had rusted. That is not good behavior for a fly reel click. The 416 stainless bar stored similarly was still bright; the difference is the chromium content.

Now the parts are out for hardness test. I will update this blog post when I know the result.

Update 23 Aug 2011: The 416 stainless test part measured Rc 43. From reading the data sheet by Carpenter, I had expected Rc 37 (temper at 600F). But now I see a data sheet by Atlas, which shows BHN 410, equivalent to Rc 44. So I conclude that the heat treatment of 416 proceeded normally.
I had expected a bad result from the 41L40 sample part, but it measured Rc 54. This is in reasonable agreement with Bryson, who gave Rc 53 and Rc 52 for anneal at 300 and 400F. Despite my problems with the bag inflating, this was also a successful quench.

This entry was posted in Heat Treating. Bookmark the permalink.