On a fly reel, the radial clearance between the spool ends and frame should be as small as possible. It is probably not practical that this clearance be as small as the diameter of the finest tippet that might be used, but a small clearance at least reduces the chance of tippets going where they should not.

On my current reel design, there are six parts for which concentricity of features is important in avoiding a rub of spool end on frame. So I am always concerned with maintaining concentricity while making parts.

Recently I read on a hobby machining forum a comparison of Sherline’s chuck centering system to that of another manufacturer of small lathes. The Sherline system was held to be inferior because it lacked a pilot diameter where the chuck fits on the lathe spindle. Here is what is under discussion.

The thread on the Sherline spindle is 3/4-16 UNF. When a chuck is screwed on, it stops when it comes into contact with the flat surface just behind the thread. So we depend on the thread itself to make the chuck concentric with the spindle. Apparently the other manufacturer provides a pilot diameter between the thread and the flat surface. Threads are cut with non-negligible clearance (for easy fit), so is there a flaw in the Sherline approach?

I decided to make an empirical investigation. Here I have centered a pin in my 4 jaw chuck to within 0.0001 inch. Then I removed the chuck and reinstalled it five times. Each time the runout on the pin remained at about 0.0001 inch. I am sure that the thread clearance is much greater than this. 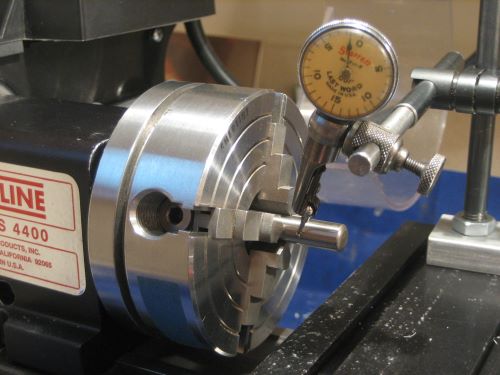 So by this test, I find no deficiency in Sherline’s approach. My theory is that the thread acts as a taper. As long as we avoid trapping metal particles in the thread, the chuck centers as it is tightened. As a point of machine design, observe in the first photo that behind the thread and in front of the flat surface there is a short length of spindle for which the diameter is that of the thread root. This ensures that there is no incompletely formed end to the thread that might throw the chuck off center. I believe that this feature is called a spigot.

I think that any pilot diameter with a close enough fit to provide 0.0001 inch centering would be difficult to use; the chuck would consistently bind on the pilot as it was screwed on.

The Sherline 4 jaw chuck can also be used as a milling vise (see this blog, 7 Feb 2012). It mounts to the mill’s rotary table with the adapter shown here.

This adapter fastens to the rotary table with a 3/8-16 UNC thread. This interface also has a 7/16 pilot diameter, but the clearance is loose enough that installation and removal are not difficult.. 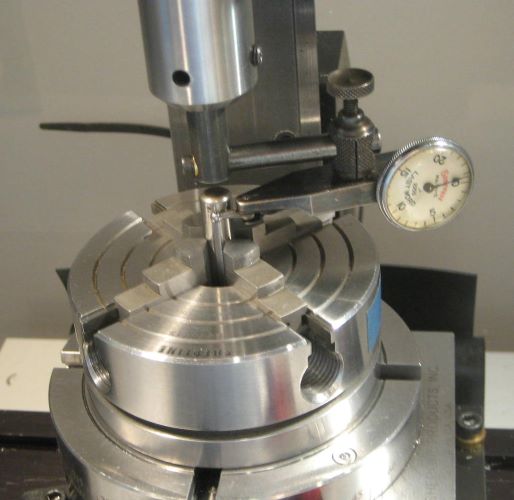 So the centering error on the mill rotary table is about 0.0007 inch. That is OK for making reels. If I were making watches, I would be concerned.

Update 22 May 2013: I was wrong about terminology. The smaller diameter behind the threads is a relief, and more specifically a thread relief. So at the nose of the spindle we have threads, a relief, and (per Alan, below) a register.
A spigot is of course a beer or water tap. But a spigot joint is a particular type of pipe joint, and the term applies to some circular joints in machinery other than pipe joints.

This entry was posted in Work Holding. Bookmark the permalink.