If we were perfect fishermen, our reels would not need any provision for thrust loads on the spool (i.e., loads in the direction of the spindle axis). A fish on the line creates a torque on the spool, which we counter with an appropriate force on the knob. But we are at times likely to get a little excited when playing a fish and then apply extra forces on the knob that really are not needed to bring in the line. Typically these extra forces will be in the direction of pushing the spool into the frame.

In my first “fixed spindle” reel design, I included a bronze thrust washer in the frame, which ran against the face of the acetal ratchet. 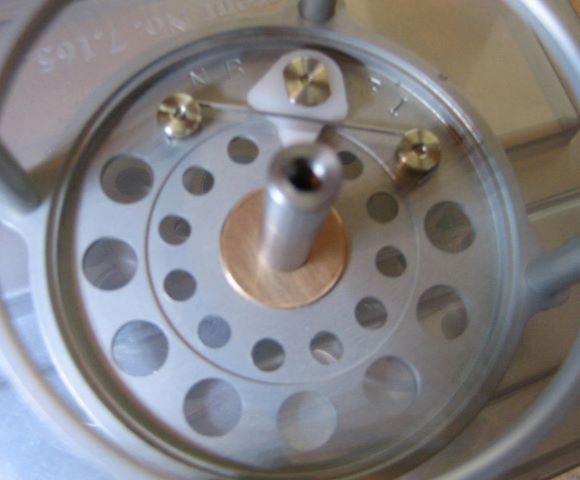 But it was difficult to make the two faces of the washer parallel. I made several different fixtures to assist in this, but none were totally satisfactory.

When I created my most recent reel design, I left out the thrust washer. Now the thrust bearing is a raised face on the ratchet, running on the anodized inside end of the frame. 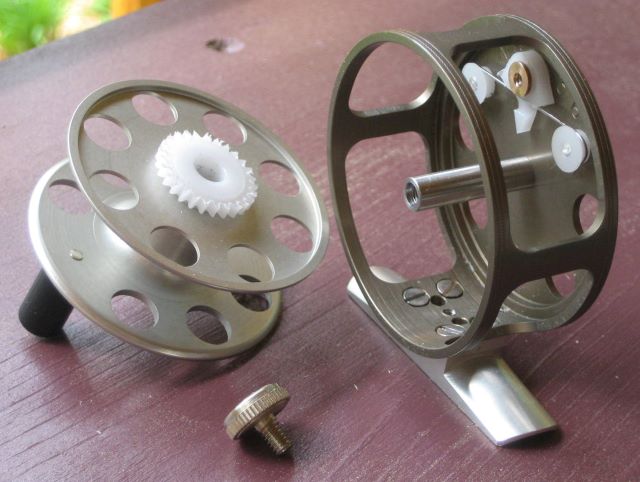 Is this OK? I had to devise a test to help convince me.

Here is the fixture for my test. On the right is an anodized plate supporting a short spindle. On the left is a 200 rpm gearmotor with an acetal runner attached to the shaft.

Where the two bearing surfaces meet, the aluminum was wet sanded to 2000 grit before anodization, and the acetal was sanded to 12000 grit with Micromesh pads.

Here the fixture is assembled. The gearmotor weighs 2.3 pounds and provides the thrust load for the test. A piece of wire carries the necessary torque.

I ran the fixture for 4 days, over one million revolutions, and the anodize coating remained intact. Had it broken down, it would have been visible and it would have conducted electricity. My conclusion is that this is an adequate thrust bearing.

This entry was posted in Testing, Thrust Bearing. Bookmark the permalink.