A Lesson in Burr Removal

When metal is cut, a sharp edge is often left. Part of making a useable product is removing any sharp edges or (even worse) burrs. Even very small details of parts may have detrimental burrs.
——
When I developed my first reel design (this blog 13 Jan 2011), there was the problem of choosing materials for ratchet and pawl. I undertook testing (summary 23 Aug 2011) to find suitable materials for both. I eventually chose Delrin (actually, acetal copolymer, almost the same) for the pawl. I ran many pawl materials against a bronze ratchet.
Once I knew that Delrin would be the pawl, why not Delrin for the ratchet also? I already had made bronze ratchets for my first 5 reels, and the combination had tested well, so I went ahead and built the five with the bronze ratchets.

By now the reels have had some use, and I have been able to see how two have done. Both had the same problem: the pawls were being consumed. They were shorter than when first made, and the tips did not look as if worn in my gearmotor testing. They looked as if they had been machined away. Here is a bronze ratchet, with a pawl that is .020 shorter than when first made. 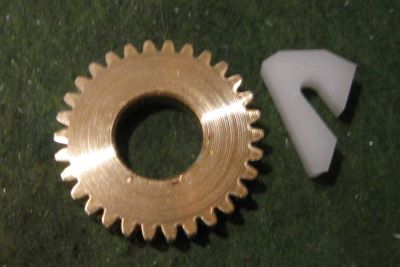 The total depth of the 36 DP teeth on the ratchet is .060, so the wear is very signficant.

So I am recalling the 5 reels for repair: a new pawl and a substitute ratchet of Delrin.
By the time I made parts for my second reel design (see 10 Aug 2011), I was using Delrin for the ratchet also.

This entry was posted in Click, Milling, My Reels, Ratchet/Gear. Bookmark the permalink.

2 Responses to A Lesson in Burr Removal